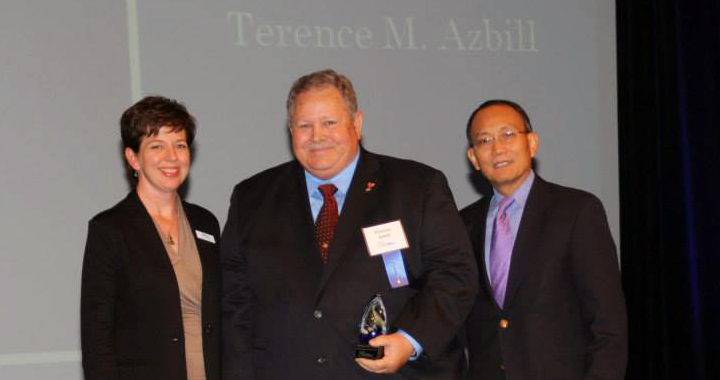 The Alumni Achievement Award was presented to five alumni who have excelled in their professions, while giving back to their communities. Among the five was our very own Terry Azbill, Chief Law Enforcement Officer for the Office of Inspector General.

Prior to joining DES, Chief Azbill served Arizona residents as an officer with the Arizona Department of Public Safety (DPS).  Beginning his career as a highway patrol officer, he quickly rose through the ranks holding command level positions in DPS's Highway Patrol Division, Criminal Investigations, Advanced Training Division, Organized Crime/Narcotics Division and the Organized Crime Intelligence Division. During his tenure, he served as the Executive Director of the Southwest Border High Intensity Drug Trafficking Area (HIDTA) and District Commander of Southern Arizona Criminal Investigations, at which time he was also Acting Police Chief in Sahuarita, Arizona.

Chief Azbill also serves the national law enforcement community as a mentor and counselor to officers who have been impacted by their involvement in a shooting.  When he was a young sergeant with DPS, while with his family at a bank drive-thru window, he observed an armed robbery in progress. Without hesitation, Sergeant Azbill intervened resulting in the shooting death of the robber. As a result of his heroic actions, he received the Medal of Valor from the Arizona Department of Public Safety and the Silver Bullet Award from the Phoenix Law Enforcement Association. His actions lead to national press coverage, which resulted in police officers from across the country contacting him to talk about their own incidents involving on-duty shootings. Chief Azbill continues to provide guidance and counseling to officers whenever the opportunity arises.

In addition to his service to Arizona, Chief Azbill is a veteran with a distinguished career. While still at DPS, he was recalled to active duty with the U.S Army during the first Iraq war (Operation Desert Shield/Desert Storm). His first assignment was Executive Officer (XO), then Commanding Officer (CO) of the 855th Military Police Unit. With nearly 200 soldiers under his command, he was responsible for simultaneous operations in Saudi Arabia, Kuwait, Iraq and Bahrain.  His unit received recognition from the Secretary of Defense, the Secretary of the Army and the Governor of Arizona for superior performance. In addition, U.S Army Captain Azbill was personally awarded (among other medals) the U.S. Bronze Star Medal, the Army Commendation Medal, the Army Achievement Medal, the Southwest Asia Service Medal, the National Defense Medal, and was also the recipient of the Citizen of the Year Award from the Cable Television Association.

Chief Azbill's community service was also a deciding factor in his selection by MCC. As a leader in his church, he has served as Mission Leader, Young Men's Advisor, Sunday School Teacher and Home Teacher. He is also an active member of the Veterans of Foreign Wars, as well as a member of the International Association of Police Chiefs and Arizona Association of Police Chiefs.

Despite Chief Azbill's long list of accomplishments, he maintains that his most important accomplishment is his family. He and his wife Cynthia have been married for thirty-nine years. They  have two children, Alisa and Aaron.

"In my 35 plus years of service to the State of Arizona, my family has been my greatest source of support and encouragement," said Chief Azibll.