“It’s been 180 degrees!” said Margaret Torres, regarding her son’s developmental progress over the past year. It started slowly, but with patience, a lot of effort, and help from the DES Division of Developmental Disabilities (DDD), Beau is on his way to a great future.

Unlike the birth of her daughter, Abby, Margaret had a fairly difficult delivery of her son. Because the mother’s and infant’s oxygen levels and heart beats were erratic, the hospital set up specialized monitoring equipment within Margaret’s room. “They did ultrasounds and sonograms, so they found a lot of stuff they probably wouldn’t have found until much later. It could have been dangerous.”

One of things uncovered from all the tests and monitoring was a rotation of the newborn Beau’s intestines. A Ladd’s procedure was performed. According to KidsHealth.org, Ladd’s is a surgery that straightens out the intestines; the small intestine is folded into the right side of the abdomen, and the colon is placed on the left. 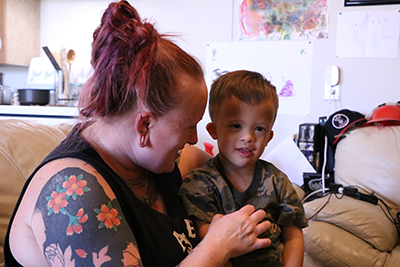 Beau Torres, 4-½ years old, is able to sit up straight on his mother’s lap without back support.

About five to seven days after Beau’s birth, he was diagnosed with Down’s syndrome. “He spent a month in the NICU learning [how] to bottle feed,” said Margaret. With a chuckle she added, “which he promptly forgot as soon as we left.” He was discharged with a nasogastric (NG) tube, which stayed in place for approximately 18 months. The tube has been replaced with a gastrostomy tube button until he learns how to chew and masters drinking from a cup.

“When he was born, we started therapy,” Margaret continued. “He was obviously too young for speech but we did a little feeding therapy. The feeding therapist told me that one of the things we could start doing with him was [American Sign Language] because it helps with cognitive function for people with Down syndrome.”

After his hospital discharge, Beau started receiving in-home therapies provided first by the Arizona Early Intervention Program (AzEIP) and transitioned into DDD’s Early Intervention Unit when he turned three. When the pandemic hit and in-home services stopped, Margaret took Beau to Phoenix Children’s Hospital’s Team 4 Kids program in 2021, with which DDD contracts. “I have told everybody whose child needs therapy, ‘This is the place to go.’ When he started there last July, he was almost nonverbal […] and he could maybe walk three steps before he had to sit down,” explained Margaret. “It’s been 180 degrees. He’s walking all over the place, he climbs, he runs. It’s been really good. He can now walk to a toy, squat down, pick it up [without] having to touch anything for balance. 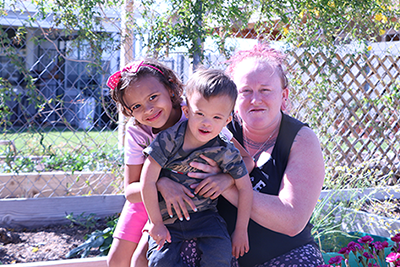 Abby, Beau and mom, Margaret, give a tour of their garden.

Through Team 4 Kids, Beau receives both physical therapy (PT) and occupational therapy (OT) twice a week, as well as speech therapy. In September, the family plans to add feeding therapy. On top of an already busy schedule, Beau attends developmental preschool four days a week, where he receives additional speech, OT and PT.

Today, Beau is starting to check off his therapy goals, “which really has been the most gratifying part for me,” said Margaret, “because I’ve been able to watch his growth. Thinking about this time last year, now, my mind is blown by how much progress he’s made. We were fairly certain that he was not going to be able to talk very well but now he’s very vocal. He’s actually starting to say words and he also signs more, too.”

Beau’s developmental progress and future have definitely taken a 180-degree turn towards success, thanks to his hard work, mom’s dedication and DDD services.