How DES Is Making a Global Impact

Healthcare, education and manufacturing: those are the top priorities for Liberian government officials who spent four days in Arizona, learning, listening and taking some of the state's methods home with them. Government officials from the African nation visited Arizona, four other states and Washington, D.C., in search of better ways to care for their people who are still trying to get on their feet after war, the Ebola health crisis of 2014 and the economic downturn that followed.

"We're thrilled that the government of another country would choose Arizona as a model for its social services," said Arizona Department of Economic Security (DES) Director Timothy Jeffries.  "Having Liberian Vice President Joseph Nyuma Boakai and the Liberian Ambassador to the U.S. here to learn about the practices we're using at DES was an honor and a privilege." 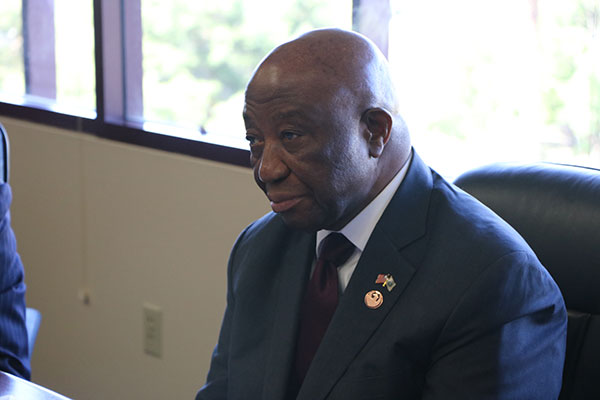 DES Office of Community Engagement Assistant Director Leah Landrum-Taylor was part of the group, which spent time at DES, Arizona State University, the Arizona Department of Education, the City of Phoenix and food manufacturer Frito-Lay in Casa Grande.

During his visit to DES, Vice President Boakai met with DES Division executives, Arizona Department of Health Services (DHS) Director Dr. Cara Christ, Arizona Health Care Cost Containment System (AHCCCS) Deputy Director Beth Kohler Lazare and the Black Nurses Association of Arizona.  He says he knows Arizona has problems of its own to fix, but is confident state leaders also have solutions, and he's appreciative of their willingness to share those solutions.

Landrum-Taylor says she was told the visit to DES was particularly informative, given that Liberians are still trying to get on their feet after the 2014 Ebola crisis. What DES can offer them are some new methods of caring for the sick, the disabled and the poor. DES will be sharing with Liberian officials how it set up its DES-on-the-Go mission of delivering services to those in far-flung areas who have limited-to-no access.

Providing health care to the country's 4,000,000 people with a small number of doctors is nearly impossible. With no pre-natal care plans or mid-wives, Liberia has a high rate of infant mortality, as well as a high death rate among mothers giving birth.

"We're going to show them how they can lay this out, and be able to have these mobile command centers to offer health care, teaching, training, and provide vaccinations and things that are necessary for them to be able to thrive," said Landrum-Taylor.

Vice President Boakai also signed a Memorandum of Understanding with the Black Nurses Association of Arizona, which will work with the Liberians on their mobile health units. The Vice President talked about the challenges in dealing with the Ebola outbreak, which was initially mistaken for E.coli. Simply educating the Liberian public on hygiene and sanitation practices, like hand-washing, will go a long way.

Caring for the disabled and the elderly is another priority for Liberian government officials, who heard from DES Administrators in the Divisions of Aging and Adult Services and Developmental Disabilities how their divisions reach out to their clients. Vice President Boakai talked about the scores of blind people who gather around his vehicle, looking for hand-outs, and wait outside his office on a regular basis.  While Arizona is the best in the country in providing in-home services for the disabled, in a country like Liberia, where many are homeless, that's not an option.

While Arizona and Liberia seem worlds apart-and, in fact, are on opposites sides of the globe-Landrum-Taylor says, people are people, and helping them is what DES is about.

"It's no different than what we've been doing with our tribal communities," Landrum-Taylor said. "Even though they're in our own state, people don't realize they're sovereign nations. I look at this as another sovereign nation we can help."