He may not have been featured on America’s Got Talent, but for DDD member, Matthew, his gifts are indisputable. In 9th grade, a teacher reported to Matthew’s parents, “He has talent!” Now a freshman at Pepperdine University, Matthew is living and studying classical guitar in Malibu, California, under one of today’s most prestigious guitarists.

While not yet eligible for DDD services as a child, Matthew stopped communicating completely when he reached his teens. “One of his teachers approached me because he wasn’t talking at school, at all,” said his mother, Dawn. She was at a speech therapist’s appointment for her daughter and both her sons were with her. It was the daughter’s speech therapist who told Dawn about selective mutism. It’s a chronic anxiety disorder. The anxiety is so severe, the person cannot speak outside of the home.

Dawn was encouraged to reapply to DDD on behalf of her oldest child. “The psychologist that’s been following him since he was little … convinced me to try again for DDD. She said, ‘it’s different when they get older, the qualifications are a lot different ... I have a feeling that he will qualify.’ And she was right!”

“I remember a DDD social worker looked at me and said, ‘We can help your son’,” said Dawn. Since then, at age 15 or 16, he started receiving occupational and physical therapy, but the focus was on speech therapy. “We wanted to get him communicating.”

The speech therapist guided the entire family, too. “Part of the speech therapy that we went through was also to teach us [the family] not to speak up for him,” said Dawn. “We had to learn to give him a couple of minutes to let him try to respond. DDD is really a lifesaver for us … and I would say, for many families, too.” 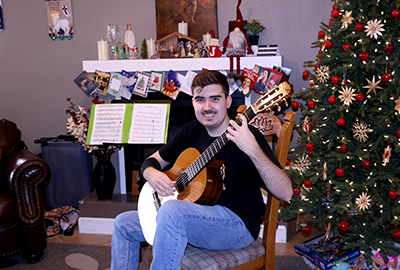 Using only his fingers to pluck the guitar strings, Matthew’s playing is smooth and evocative.

Matthew’s musical journey began in 9th grade when he took a guitar class and his innate talent was revealed. Towards the end of the year, the class did a piece on classical guitar and Matthew “fell in love with it,” said Dawn. “I think the guitar and the music also helped him come out a little bit.”

Matthew later attended the Phoenix Conservatory of Music, and after one year, he became “too advanced for the guitar teacher.” Wanting to move forward, Matthew started looking online–this was during the COVID-19 pandemic–and found a teacher in California who was providing remote guitar lessons.

This teacher required an interview and an audition before deciding whether or not he would accept Matthew, or anyone, as a student. The teacher, Christopher Parkening, is one of the top 25 classical guitarists of the 20th century, according to The Guitar Journal. He is also a Distinguished Professor of Music and Chair of the Guitar Department at Pepperdine University. Matthew was first accepted as Parkening’s student, and was then admitted to Pepperdine University.

“As part of our curriculum, every month we hold two concerts,” explained Matthew. Every music student is required to attend and perform on a rotational basis. Matthew was selected to perform during the first week of his freshman year. “I was surprised by that; I don’t think I’m ready yet.” The outcome “was a pretty good experience.” He played the 3rd movement of the Cathedral Suite by Augustine Barrios.

Matthew is currently taking freshman classes at Pepperdine – English, economics, Western culture, religion – and guitar classes, studying under Christopher Parkening. He also has an interest in playing the organ and is taking organ lessons from Dr. Cobb. His other favorite subjects include the sciences. Matthew scored high enough in Advanced Placement Biology to bypass freshman biology. “I thought I scored low, but, apparently not,” said Matthew.

When they realized that college was in his future, Dawn and DDD Support Coordinator, Sherri Wagner, modified Matthew’s habilitation goals to help him live on his own. When at school, Matthew lives with four suitemates on campus–a huge accomplishment for a young man with autism and selective mutism. He now picks up his prescription from the pharmacy (and must say hello to the pharmacist), knows how to do his own laundry and microwave his meals. His journey was long. 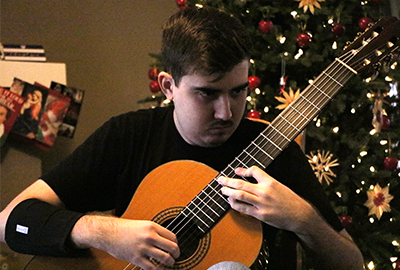 In his free time, Matthew likes “hanging out with my roommates and suitemates.” This also is something new. Matthew had friends in high school but he never ‘hung out’ with them, preferring to play computer games. “He’s experiencing the whole friendship circle,” said Dawn.

“Looking back, when it was really dim, if someone would have asked me, five years ago, that he would be talking and in college in California, I would have [said], ‘no,’” said Dawn. “Never in our lives did we dream he’d be studying under Christopher Parkening. That alone is a miracle.”;