From Client to Colleague: How Exceptional Customer Service Changed a Life

Oletha Hall was familiar with the Arizona Department of Economic Security.  A single mom who raised three kids—with one still at home—she’d had to call for assistance a few times over the last four years since moving from Chicago. They weren’t calls she liked to make. Not because of the response she received from DES, but because she had to accept assistance in the first place.

“I felt funny when I went to the grocery store, and I saw most people carrying cash or their debit cards, and I pulled out my EBT card,” Hall said. “When I pulled out that card, I felt like people behind me or in front of me were like, ‘Why doesn’t she just get a job? I’m paying my taxes for her to get this, and she could just go to work.’ Even if they weren’t saying anything, that’s how I felt.”

After leaving a call-center job in April, she had to make another call to DES to apply for AHCCCS benefits.

“This call was different than the other ones. Usually when I called for the interview, they would ask the [usual] questions—they were really nice—but they asked the questions and it was just business,” said Hall. “This particular agent was really nice. She talked to me. We had a nice conversation.” 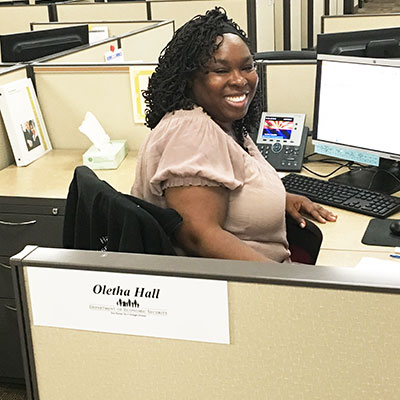 It was more than a nice conversation. It was a turning point in Hall’s life. Instead of putting her on hold, the Program Service Evaluator (PSE) on the end of that call talked to Hall about her PSE job at DES, how much she liked working there, and persuaded Hall to apply herself.

“She was encouraging, telling me I sounded nice on the phone, and telling me ‘You’ll do great!’” said Hall.

After that phone call, Hall did apply. She didn’t hear anything immediately, and in the meantime, accepted a job at another call center. It was a sales job, and she knew within the first week she wouldn’t be happy there. Just before her training ended, she received a call from DES and was offered a position as one of the newest PSE’s in the Division of Benefits and Medical Eligibility’s Centralized Operations office at 8800 N. 22nd Avenue in Phoenix.

Hall started working in July, and after just a few weeks on the job, she reached out to her supervisor to let him know how important it was to her, as a client, to have been treated with dignity and not made to feel “less-than.” She wanted to thank the woman who helped her, though she couldn’t remember her name. With the help of the Local Office Manager, the woman who took that life-changing call was found, and, as it turns out, worked in the same building. The women had not spoken since that call back in April.

Both women were pulled into a staff meeting one morning in August, and Hall was asked to tell her story. Unaware they were both in the same meeting, it was announced that “Lisa,” the woman who’d inspired her, had been identified. Lisa DeForest remembers looking around at the group for another “Lisa,” not realizing she was the one who had made such a difference.

“It was really a nice moment for me, too, actually,” said DeForest. “We hugged and I thought I was going to cry. It was really sweet.” The fact that Hall event remembered her and wanted to find her felt really good to Lisa. “I’ve told a lot of people in the same circumstances that this is a good place to work, and I’m just surprised someone took me up on it.”

Lisa, herself, had also used DES services prior to being hired. After being laid off, she’d attended a DES job fair and was encouraged to apply, just as she now does with others.

For Hall, it’s more than a job.

“I’m in a career now,” said Hall. “She [DeForest] didn’t just give me benefits, [she] gave me a career. My whole life changed.”

In her new position as a PSE, Hall vows to pay it forward and change others’ lives.

“I want to not just help people, but [I] want them to understand:  I was where you are,” said Hall. “I will never judge you. I’m here to help you in any way I can.”

She also wants her colleagues to learn from her story.

“If there is anyone out there with pre-conceived notions about people who receive benefits, I hope my story will dispel [them]. And for [those] on the phone, I hope they are more personable and engaging, because it makes a big difference. When it’s just about business, it makes [people] feel bad. But when you talk to [them] as a person, [they] feel more encouraged. That’s what I want my colleagues to come away with.”

“I am so happy,” said Hall. “I feel like I have more to offer here. I’m not trying to fix your cell phone or sell you a cable package. I’m trying to help you get on your feet so you can become self-sufficient; that’s what it did for me. And it’s not just me that’s affected, it’s my children. It’s teaching them, through my example, that you will fall, but you can get back up.”