DDD Member Gets a Fresh Start in Phoenix through Affordable Housing 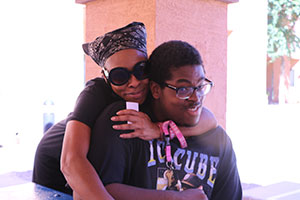 Eighteen-year-old De'von and his mom, Ramona, recently moved to Phoenix from Tucson into their own apartment. After the death of her husband and the downturn in the economy, the family “lost everything,” said Ramona. They were homeless for a while, lived in hotels, then moved in with Ramona’s mother in 2017. After five years of living in cramped quarters, the two were happy to move out on their own, even if it meant leaving Tucson.

Now, De'von, a member of the DES Division of Developmental Disabilities (DDD), has a fresh start in Phoenix, thanks to the opportunities provided through the DDD Affordable Housing Program. After receiving a recommendation by De'von’s DDD Support Coordinator in Tucson, De'von was able to take advantage of one of DDD’s Affordable Housing Program options, the Section 811 PRA program. 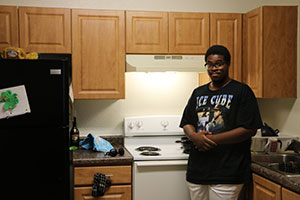 De'von shows off his kitchen.

Administered by the Arizona Department of Housing (ADOH), the Section 811 PRA Program enables individuals with disabilities who are low-income, and ALTCS-eligible, to live in integrated, affordable housing. The 811 PRA grants, coordinated through DDD, provide a subsidy for approximately 105 apartments throughout Arizona. Apartments are leased as vacancies occur. When the Phoenix apartment became available, De'von and Ramona took a tour and made their decision. After they get a bit more settled in, De'von plans to invite a friend from Tucson for a weekend visit.

Further establishing roots, De'von is enrolling in Maricopa Community College for General Educational Development (GED) courses, after which he may enroll in a local trade school. He’s also setting new routines for himself and becoming familiar with his new surroundings in Phoenix. 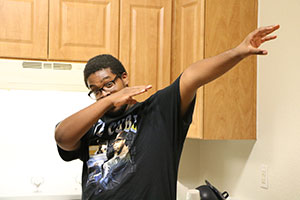 De'von celebrates his cooking skills with a little dance.

“It’s cool,” said De'von. According to Ramona, the neighborhood “is quiet, people mind their own business, and it’s not too loud or noisy.” Their apartment is close to shopping, restaurants and public transportation. De'von, who likes playing video games, also enjoys taking walks around the neighborhood. “It’s good exercise,” said Ramona. 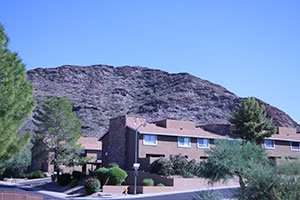 De'von and Ramona share a mountain view with a neighboring apartment complex.

The apartment complex features a swimming pool, basketball courts, playgrounds and a community center. Most of all, it’s close to the mountains.

“I love it here,” said Ramona.