Michael Kyrstynak has made a career for himself. Once offered a scholarship at DeVry University, Michael chose to remain working at his local McDonald’s instead. That was 24 years ago. Throughout the years and with support from the DES Division of Developmental Disabilities (DDD), Michael has reached a new level of independence. 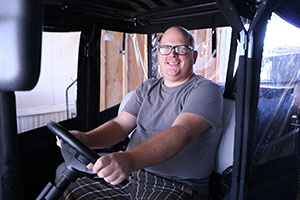 Michael behind the wheel of his new golf cart. Michael commutes to work via golf cart. He also uses the golf cart to run errands, such as picking up groceries or prescriptions.

It all started when Michael filled out a job application followed by an interview. He started working on June 16, 1998. “I’m just happy,” Michael said of his job. He works during the restaurant’s busiest days - Fridays, Saturdays and Sundays. For him, interacting with people is one of the perks of the job. “I enjoy talking with customers, asking how their day is, how they are doing,” said Michael. The “regulars” know him by name. On Fridays, the restaurant is host to a “Cowboys Coffee” klatch or a social gathering, especially for coffee and conversation, where a group of local men meet weekly for coffee and apple pie. In addition to the regulars, this particular McDonald’s also serves busloads of customers - tour buses, school buses of high school sports teams, and kids on school field trips.

Since the COVID-19 pandemic, Michael has been working the drink station, serving beverages such as soda, coffee, and orange juice, and calls out order numbers for customers to pick up their meals. He’s also done maintenance for the restaurant and unloaded trucks. 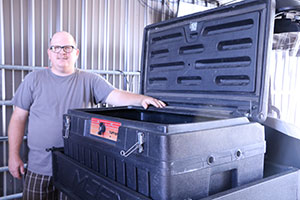 Michael uses a bin on the back of his golf cart to store the groceries and other items he picks up when he runs errands.

At home, Michael and his brother receive habilitation and respite services from the DES Division of Developmental Disabilities (DDD). Patrick, Michael’s caregiver, has taught him how to write in cursive so he can sign legal documents, and calculate simple math tasks. Patrick is also teaching Michael how to cook. Together, they have cooked chili, chicken noodle and other soups, stuffed peppers, eggs and bacon, salads, and fried chicken.

Michael also helps his father, Edwin (Ed). “He is now taking care of me,” said Ed. He gives me my coffee every morning, makes my bed, is trying to learn to cook; and has made me the best salad!”

According to Ed, Michael has had “a 100% turnaround.” Michael taught him how to work the remote control and his proficiency reports from work always come out as “excellent.” 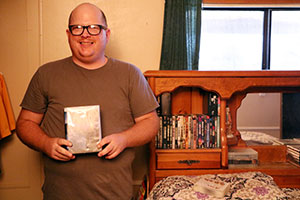 An avid gamer, Michael shows one of his DVDs from the library he and his brother have collected.

“Michael has flourished and is more independent,” said Junana Aranda, Michael’s DDD Support Coordinator “He also handles the Individual Service Plan (ISP) meetings on his own.” He has his own bank account, debit card and cell phone.

Protective of his family and friends, Michael “looks out for my dad and my brother.” According to Patrick, Michael “watches out for everybody. [He] is thorough on the job [and] is committed.”

Ed added, “I wouldn’t be able to do anything without him.”