A Butterfly is Emerging in Mesa

Even at just six years of age, Maxton and his remarkable family have trekked a long journey. Though the destination is not yet in sight, it’s been a successful journey thus far. Formerly a member of the Arizona Early Intervention Program (AzEIP), Maxton transitioned to the DES Division of Developmental Disabilities (DDD) at age 3. DDD advised Maxton’s mom, Kaiya, that at age 3, he qualified for pre-kindergarten.

“We found one of the most amazing schools,” said Kaiya. “It’s called Val Vista Lakes and they had a S.P.I.C.E. program.” S.P.I.C.E. is an acronym for Social, Pragmatics, Independence, Communication, and Emotional Regulation. His teacher taught teens with autism for 13 years but wanted to work with younger children. “Once you start really young, [children] have a better chance to normally function in society, and be social and have all those skills.”

Maxton was diagnosed with Level 3 autism right before he turned age 6. A There are 3 levels on the autism spectrum. According to AutismSpeaks.org, Level 3 autism is the most severe and requires “very substantial support.” The organization also notes, characteristics of Level 3 autism features “severe deficits in verbal and nonverbal social communication skills [and] cause severe impairments in function, very limited initiation of social interactions, and minimal response to social overtures from others.” He is also a member of the Arizona Long-Term Care System (ALTCS). 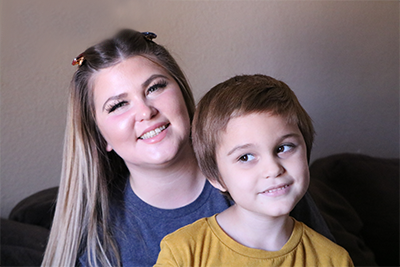 When he was a baby and his parents would call out his name, Maxton would not make eye contact. Mom notes, “A neurotypical baby, they look at you for your facial expression.” In comparison, her daughters, ages 1 and 2 will scowl at mom when she says ‘no.’ “With him, it was kind of like [he was] in a bubble. Always just doing his own thing. He’s always been very independent. He loves to play by himself. He was such a good baby, very quiet. He progressed normally – he walked on time. Physically, there’s nothing wrong with him.”

“I started doing research myself. What is autism? What can I do to improve his cognitive skills and his thinking, because he was always kind of in a little cloud?” In her research, Kaiya discovered a book written by a neurosurgeon, Dr. Natasha Campbell-McBride: Gut and Psychology Syndrome. Natural Treatment of Autism, ADHD, Dyslexia, Dyspraxia, Depression and Schizophrenia. Kaiya explains, “Basically what it’s describing is our guts and our brains are very much connected. And with autism, they say that a lot of kids have digestive problems [and] they don’t sleep well. They’re not having the proper bacteria to properly get that nutrition in their body to speak to their brain, to kind of function better. So, I changed his entire diet.”

It took two years, but Maxton was slowly taken off all dairy, processed foods, and corn syrup sugar. “I started making bone broths,” said Kaiya. “I would go to butchers’ and ask them for their bones.” Mom and Dad would make a giant stockpot of bone broth and would store them in jars in the freezer. Then they started making smoothies. Kaiya would use a juicer to juice beets, root vegetables, strawberries, and berries. “I’d put all this stuff together [including vitamin B-12 and a supplement that helps with digestion] in a smoothie and he’d drink it.”

Changing Maxton’s diet “was really hard because you go to the grocery store and read some of the stuff on the back of the boxes. It’s so hard to find snacks. I had to basically make everything myself. It was so worth it! He went from being in this cloud state to making eye contact!” The new diet has also helped with Maxton’s sleeping. And now, Maxton is learning how to talk! He can count to 20, and say words like “Goldfish,” (Goldfish crackers are a favorite snack), “Please,” “Thank you,” and “You’re welcome.” Maxton knows all his colors, is very artistic and is “all boy” - playing outdoors, soccer, Hot Wheels, trains, dinosaurs. He loves to sing and will often sing along with the music on the Cocomelon Show.

“He’s just doing so well. He loves school and he graduated last year from pre-kindergarten in the Val Vista Lakes Elementary…a Gilbert public school. I was driving him all the way [from Mesa] there because I think that school is fantastic. […] It was worth it. When he was in pre-kindergarten, the school [day] was from 11:00 a.m. to 2:00 p.m. When he started kindergarten... it’s now 7:00a.m. to 2:00p.m. So, he has a full day.” Maxton has speech and physical therapies during the day. “He used to drag his feet. Now he’s picking up his feet more, so the physical therapy really helped him.”

Unlike many on the autism spectrum, Maxton is very affectionate. “He’s always been affectionate. He loves to be cuddled and he loves to give hugs.” He’s also a watchful big brother to his 1- and 2-year-old sisters. “He looks out for them, too. Any dangerous situation […] he’s very aware.”

“It’s all those things that we [put] into place to build that up for him. It just really encouraged him, especially with the diet. With that diet, it was like (finger snap) he switched off to a different person!”

Like a butterfly slowly, steadily emerging from a cocoon, Maxton is preparing to take flight.