The UI Call Center will remain open on Martin Luther King Jr. / Civil Rights Day, Monday, January 18 from 9:30am-3:00pm. However, DES Offices will be closed Monday in observance of the state holiday.

A Sliver of Silver in a Pandemic Cloud

When Ellison Cardenas-Acosta was a baby, his mother, Maritza, knew something was not right with his development. After seeking an assessment from the EasterSeals, Ellison started receiving early intervention services. A month after his 2nd birthday, when he still wasn’t talking, Ellison was diagnosed with autism. That’s when the DES Division of Developmental Disabilities (DDD) “became prominent” in the family’s world.

“When I think of him at 2 years, when he got diagnosed first and when I think about him now, I’m so proud of him,” said Maritza. “He’s worked very, very hard his whole life. Things that come so easy for everybody else, they’re not as easy for Ellison, but he works really hard.”

One of mom and dad’s concerns was how Ellison would respond to the changes in his routine caused by the COVID-19 pandemic. “It was hard, there were behavioral things, but the one upside of it: he loves technology!” said Maritza. “We did not really know this until COVID when we were forced to have everything through the computer and technology.”

In-classroom learning only added to Ellison’s social anxiety. “This year we noticed that he actually wants to participate in the [virtual] classroom. He raises his hand; that’s amazing to us! We think that because he’s at home in a comfortable space and the computer, the social anxiety of being around peers has decreased. I think the computer is his buffer and it allows him to feel more comfortable and to be himself.” With his network of support and technology, Ellison shows “more of himself.”

“I’ve been blessed to have great support coordinators through DDD, so I feel very lucky,” said Maritza. “Usually when a DDD person would come over, when they used to be able, pre-COVID, Ellison was not part of the meeting at all. He knew people but he’d kind of watch at a distance so I would have to force him to come say, ‘Hi.’ He would stand in the corner, say, ‘Hi,’ and completely leave. He wanted no part of it. 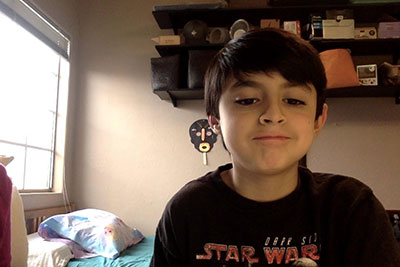 A selfie of Ellison that “he took all by himself using ‘Photo Booth’ from an Apple computer,” said Maritza, his mother. “I am so proud of him!”

“One of the first times he had a support coordinator meeting with the computer, Ellison just wanted to watch. We thought, this is progress because he’d never wanted to be a part of this meeting or to be around any of this. By the second meeting, he was participating. By the third meeting, we just had one recently, [DDD Support Coordinator] Junei [Mauger] was able to ask him questions and he was able to answer them. His dad and I were in the background [and watched as] he was engaging in conversations with her. We were just floored!”

According to Junei, “When I first met [Ellison, when meetings were held in his home], he ran. He would hide from me. As months passed, the very first virtual meeting we held, he would show up on camera. The next time, he would sit in front of his own computer in his room, and engage here and there. He is now engaging fully in conversations (virtually). He will give me dates of his medical appointments, what medications he takes, and will engage through the entire meeting… He will ask questions, respond to questions and have me reiterate what he’s saying (his schedule, his accomplishments, etc.).”

Maritza explains, “It’s not just the progress from when she took over the case a year ago … at 2 [years old] he wouldn’t even say mama. Just to see him [now], we are so proud! The autonomy, the level of independence, that he just wanted to take ownership of his own meeting. It was amazing. I think that was always there, I just think that …with technology and providing the extra support of [DDD] services, increasing his speech [therapy sessions] from once to twice a week… it’s just amazing to see. We are beyond thrilled. We couldn’t be any prouder!”

Junei concurs, “He has come MILES from where he used to be, and I couldn’t be more proud of him!”

“We couldn’t have imagined or foreseen that a year ago,” said Maritza. “Parents, we always worry about the future, we worry about our kids and COVID has been rough. This experience is teaching us there’s some sort of silver lining somewhere, and so, through this experience we’re learning that maybe there are different ways of learning for him that we didn’t explore. Maybe he would be a better online learner in the future. Maybe this is something that we can build and maybe be a potential for a career later on. It’s given us a whole new set of possibilities that we did not have. .… It has brought a sense of renewed optimism. It has given us more hope.” 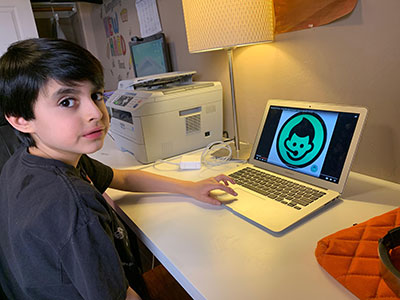 Maritza continues, “He’s better on the computer than I am. He knows how to get onto his classroom, how to log on, check his calendar. He logs on independently with all of his online speech and OT [occupational therapy] sessions. He knows how to do all of that. I think it’s given him a way of independence and he likes it. I feel very grateful to have great support coordinators who have lobbied on behalf of Ellison, to get us the second speech [therapy session] that he needed. To learn to talk about feelings, learn how to express himself, all of that is very important for his future.”

Laughing, Maritza relates that, “He doesn’t want me in the OT sessions. He throws me out, which I find absolutely appropriate! His wants his privacy.”

“I’m a proud mama and I’m so grateful to DDD and for their continued support of Ellison. It takes a village and DDD is part of my son’s village, and his support coordinators, you can tell they’ve been very invested in him. And I’m very grateful for their labor and their time.”