Budding Therapist with Autism Looks Toward a Bright Future

Too often, people assume individuals who have been diagnosed with autism may have a limited future. However, people with autism possess different abilities that can greatly enhance their future. Jonathan Vitela is just one example of someone with autism who is enjoying a budding career as a therapist, thanks in-part to support by the DES Division of Developmental Disabilities (DDD).

“People with autism, whether it’s high functioning or low functioning, can become independent,” said Jonathan. “[They can] have a stable career, a stable job, rely on themselves [and] live a normal life like everyone else.”

Although he wasn’t diagnosed with autism until his mid-teens, Jonathan knew something was different. “I had lower grades [in school] than my peers,” he said. “I’d get distracted so easily.”

He saw a psychologist to obtain a diagnosis, but his family moved from California to Arizona before receiving the doctor’s report. Therefore, his mother reached out to DES DDD, and Jonathan became a DDD-only member. 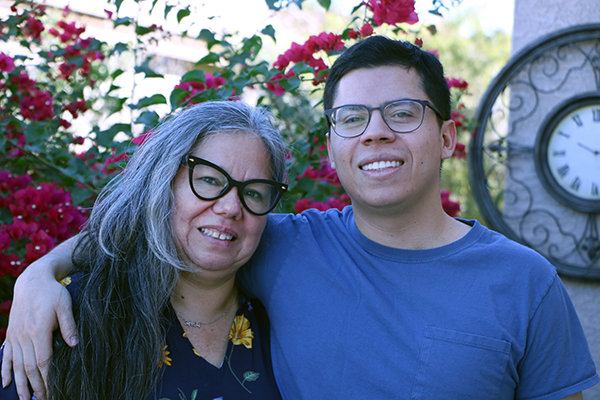 Like most young adults, you sometimes need to try on different shoes before you find the right fit in which to walk your own path. Jonathan did just that.

At one point, Stacy Kennedy, Johnathan’s former, long-time Support Coordinator, inquired with him about his record of changing jobs frequently. “She recommended I take a program,” said Jonathan. “She said, ‘Next time I come here, in the next six months, I want you to do this.’ It worked pretty well.”

He went to postsecondary school, paid the tuition himself and received a degree in phlebotomy. After graduation, he landed an internship at a local hospital. Unfortunately, drawing blood from patients gave him anxiety. “But at least I accomplished it,” said Jonathan. “I’m very proud of it, too.”

Remaining in the healthcare field, Jonathan now works as a therapist. The transition from phlebotomist to therapist was not difficult. “I was looking for jobs online,” said Jonathan. One listing was for entry-level therapists. He applied, aced the job interview and started training for a new career path. A bonus: “They paid me for the training!” Jonathan also noted that being a therapist is a good job that pays really well. Currently, Jonathan is studying for a test to obtain his certification as a therapist.

“Jonathan has matured greatly over the past year,” said Stacy. “Jonathan received a driver’s license. He is managing his finances and paying his bills, [and] recently purchased his own car.”

As Jonathan pointed out, individuals with autism can and do become independent. His success exemplifies DDD’s mission to empower individuals with developmental disabilities to lead self-directed, healthy and meaningful lives.