Turning an Obstacle into a Profession

David, who was diagnosed with epilepsy and is a member of the DES Division of Developmental Disabilities (DDD), used to experience night seizures. Fortunately, a change of medication made a significant difference, and his seizures are “pretty much under control now,” said David. New medication, combined with the support of DDD, allowed David to go to school and ultimately launch his career as a certified Polysomnographic Technician, otherwise known as a sleep tech. Now he can help those who struggle with nocturnal seizures, just like he did.

David is a member of DDD’s Targeted Support Coordination (TSC) Unit. DDD Support Coordinators help TSC members find helpful community resources. Lori Kimmel is David’s support coordinator. According to Lori, “His change in medication really made a difference in his life. He is much more clear thinking and his seizures are now well controlled. This is important because it made a big difference in his ability to concentrate on schoolwork.”

A sleep tech monitors a patient while they sleep and is extra vigilant when the patient is a back sleeper. “They have many cables on them, approximately 14 on their head, an oxygen tube that monitors their breathing ... If the patient happens to stop breathing during the night, the tech sees that and highlights where the patient had the apnea or any other respiratory event. Based on the amount of respiratory events, we can detect if the patient needs CPAP or not.” CPAP, or Continuous Positive Airway Pressure, therapy is used by individuals who have been diagnosed with sleep apnea.

There are three categories of apnea and the sleep tech monitors for each type, David explains: “[1.] Obstructive (it’s just from the trachea upwards, the tongue is almost wedged into the throat), [2.] Central (when there’s no movement whatsoever in the diaphragm; the patient is not breathing at all), and [3.] Mixed.”

David is currently working as an electroencephalogram (EEG) technician. “Polysomnography and EEG are basically cousins,” David explains. “The EEG monitors the head; polysomnography monitors more of the body and less of the head.” EEGs, in part, help doctors diagnose individuals with epilepsy, and are also used to diagnose other conditions, including head injuries, brain tumors, strokes, dementia and more. 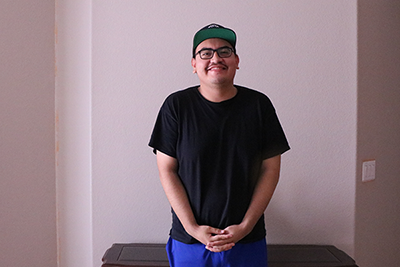 To help him with his night seizures, David himself has been a patient at various Valley sleep centers. His favorite program is at Phoenix Children’s Hospital (PCH). He went there for his own EEGs and later, was a patient in PCH’s sleep center. “They helped me a lot.”

Despite the hard work and long, late hours, David truly likes what he does. “I do, to be honest, even when I was practicing with children. Children do not like the little oxygen tube. They hate it. They would cry, scream, kick. Most of the time, I do not try to force it, but I’d say to myself, ‘look, we need this data. I need to do it [place the oxygen tube] really quick – just tape it on.’” Like adult patients, the little ones have to keep the tube in their nose during the majority of the sleep study. “It forces open your air wave to keep you from choking.”

About his chosen profession, David believes, “This field of work is so underrated. Many people don’t see sleep as medicine, [or] as something important in their lives.”

The National Heart, Lung and Blood Institute (a part of the National Health Institutes) states that “Sleep plays a vital role in good health and well-being throughout your life. Getting enough quality sleep at the right times can help protect your mental health, physical health, quality of life, and safety.

If you are experiencing sleep issues and suspect something is wrong, David recommends contacting your doctor right away to recommend next steps.