To protect taxpayer dollars from criminals and ensure Arizonans in need can access benefits in a timely manner, beginning this week, claimants filing initial claims for Pandemic Unemployment Assistance (PUA) will need to verify their identities using ID.me’s safe and secure online portal before they can receive PUA benefits. Learn more.

States across the nation continue to see an extraordinary number of claims filed as a result of identity theft. DES has become aware that some Arizona residents are receiving notices and benefit cards at their address with the names of individuals who do not reside at that location. This is the result of criminals attempting to obtain funds from the new federal Pandemic Unemployment Assistance (PUA) program by using randomly selected in-state addresses during the application process. More information regarding unemployment fraud can be found here. To report fraud, file a report online or call the DES Fraud Hotline at 1 (800) 251-2436. 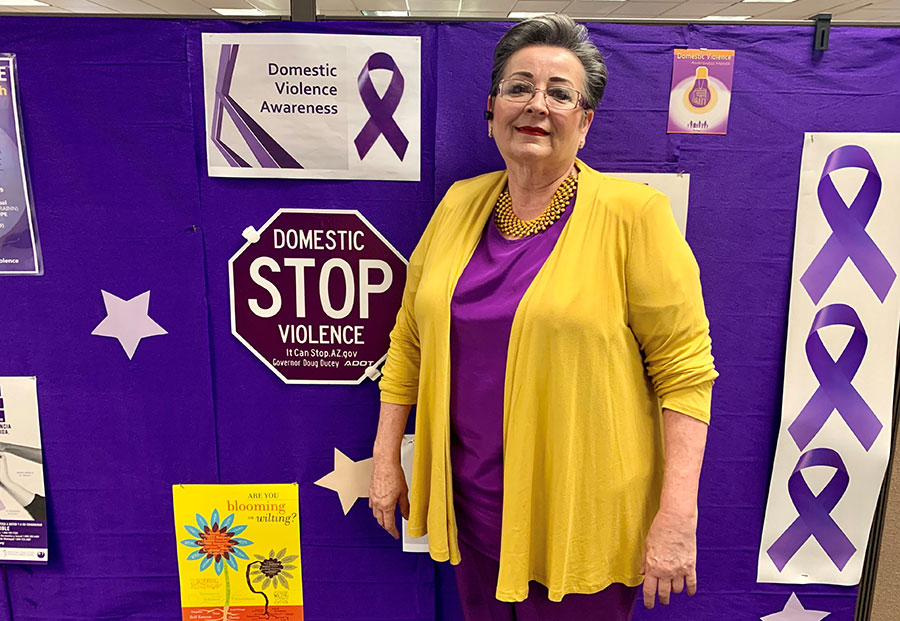 As the oldest of nine children, Maria Flores spent 33 years of her life working in Mexico with her father. While she grew up with a loving and caring family who contributed to their community, she said the daughters of her traditional family weren’t given the same opportunities as the sons. The traditional family culture of the 1960s insisted that higher education was only for men and not for women. At that time, societal norms were that women were expected to marry, have children and take care of the family.

For many years, Flores followed the path that she believed her parents and society expected of her. In the late 1990s, she met the man she would eventually marry. In 2009, she came to live with her husband in the United States.

“Because of my culture, I did not realize the power and control of my husband. He was emotionally and psychologically abusive towards me. I believed it was because he loved me so much,” said Flores. It wasn’t until several years had passed that she added physical abuse to the list of what she was enduring. “I will never forget the first time he put his hands on me. But when he got in trouble, I decided to write the judge and ask him not to put my husband in jail. So, he attended domestic violence classes, but things didn’t change.”

With $46 in cash and her cell phone, Flores decided that she could no longer tolerate the abuse and left. “I struggled so much making the decision to leave. My heart just couldn’t take it anymore,” she said. “The night I decided to leave my husband and go to a domestic violence shelter was the scariest night of my life.”

Although this was a life changing time for Flores, she knew there were resources. She started by visiting Chicanos por la Causa who referred her to the DV STOP/Crisis line. The crisis line then referred her to A New Leaf’s domestic violence shelter, Autumn House. When she arrived at Autumn House, there wasn’t any space. But they sent Flores to a motel for 36 hours and supported her through the uncertainty. “I was feeling so insecure and fearful. I kept thinking to myself, ’What was going to happen to me? Where would I live?’”

A New Leaf found a space for Flores at Chrysalis who provides emergency shelter, offender treatment, counseling, community education, mobile advocacy and transitional housing. “I value all of the work these people do,” she said. “They gave me a lot of tips to survive. All their knowledge was so valuable. It’s hard because in the first days, I was afraid of everyone and everything, and they worked with me [through it].”

Flores stayed in a room that had the capacity for four women with a shared bathroom and separate closets. Domestic violence survivors receive a continental breakfast, lunch and dinner. “I was grateful to have a roof over my head, a bed and food.”

Flores worked with a case manager from Chrysalis for a protection order. She also attended a support group through the Area Agency on Aging to help her get through the difficult time.

Through counseling and the support group, Flores learned valuable things she wasn’t seeing in her relationship. “I learned the warning signs. The ’love‘ he was giving me wasn’t actually love,” she said.

“These programs changed my life and my future. It empowered me, gave me a decent way to live, and gave me resources,” said Flores. “The staff I’ve come in contact with aren’t working just for a paycheck. They’re working from their heart.”

“I thought I had a good life in the past. But this is better.”

Having received the help she did, Flores began volunteering with DES 20 hours a week through the Senior Community Service Employment Program (SCSEP) and is now a contracted employee for the DES DAAS Domestic Violence, Homeless and Hunger Programs.

For more information on the Domestic Violence Program, visit the DES website.